"Much like war, it’s every man and woman for themselves"

Troilus and Cressida is one of the rarely seen Shakespeare plays, a weird and flightless bird.

You’ll be lucky to see it more than a couple of times in your theatregoing life.

Prior to this outing by Sydney indie company Secret House, I’ve only seen it once in a Bell Shakespeare production heavy on TV screens and media references directed by the late Michael Bogdanov at the Opera House in 2000.

For those who don’t know it or can’t recall it, Troilus and Cressida is a tale of the doomed love of a Trojan warrior for the daughter of Calchas, a Trojan priest who defected to the Greek side.

The relationship is brokered by Cressida’s lascivious uncle Pandarus and for a short while all’s sweet until Cressida is swept up in a prisoner exchange scheme. Distraught, the lovers swear to be faithful, but Cressida, once in the Greek camp, takes the captain Diomede as a lover.

Populated by figures from Homer’s Iliad – Paris, Agamemnon, Achilles, Hector, Ulysses and Cassandra – Troilus and Cressida pitches somewhere between tragedy and a satire. Some argue it is one of the most consistently topical of Shakespeare’s plays, given the futility of war and all that. Perhaps it is, but it’s a long way from his best.

A “problem play” then, which director Sean O’Riordan and his notably diverse and numerous cast of 19 actors tackle with more gusto than clarifying precision on a sandbox set.

There are some interesting physical facets to the production that make good use of the ensemble. There are also passages of play when it’s hard to work out what the heck is going on, but at least you can admire the spirit with which the muddle is served up.

Much like war, it’s every man and woman for themselves. Some characters pop, others are sketchy. Some have facility with the language and an ability to project it. Others not so much.

Charles Upton and Jane Angharad are watchable if pallid as the title couple. Danen Young hurls himself into the serio-comic role of Thersites. Emilia Stubbs-Grigoriou brings some fire to the stage as Cassandra. Alec Ebert (Hector), Shan Re-Tan (Ulysses), James Smithers (Diomedes) and Grace Naoum (Ajax) have their moments.

It’s a shoestring production but given a good leg-up with intelligent costuming (Maya Keys), Mehran Mortezai’s lighting and an interesting if occasionally intrusive soundscape by an uncredited designer.

One for Shakespeare enthusiasts and completists. 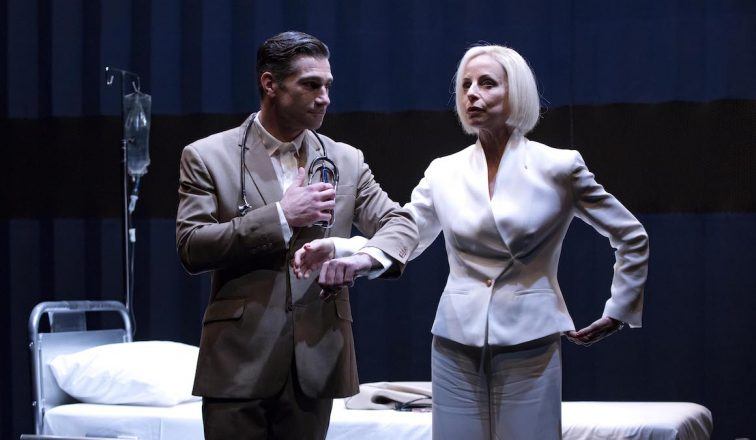 END_OF_DOCUMENT_TOKEN_TO_BE_REPLACED

David Campbell returns to play the charismatic John Wilkes Booth in this revival of a production first seen at the Hayes Theatre in 2017.

Arthur Laurents’ landmark musical documents the dying days of vaudeville and the birth of a shocking new form of entertainment.

Twenty-five years after he was sexually assaulted as a child, a journalist learns that his 'bogeyman' now lives nearby.