Audrey review: This fine Griffin production of Kendall Feaver's play taps its underlying anger and urgency and seldom lets you off its hook.

Kendall Feaver’s very assured first play – which debuted in Manchester, England earlier this year – takes a deep dive into those blurry boundaries between parent and child, carer and lover, the personal and the professional.

It also delves into that contestable zone between artistic talent and mental illness, between “madness” and “genius”.

Feaver’s subject is Anna (Brenna Harding), a young woman with a history of mental illness and disturbed behaviours.

Aged seven, determined to die, she threw herself out of a window. It was a first floor window and she only broke an arm. But it was a warning shot.

Aged eight, she was composing notebooks full of lengthy stories whose violent images persuaded her mother Renee (Hannah Waterman) to seek the services of a child psychologist Vivienne (Penny Cook).

Anna has been on anti-psychotic drugs since she was 11.

But aged 18, Anna is ready to fly the coop. What would life be like – and what would she be able to achieve as a writer – if she stopped taking her meds?

“I have been on those pills so long, I don’t know who I am without them, if the things I say or do are because of the medication or in spite of it,” she says.

There’s only one way to find out the answer.

Feaver’s script carefully balances personalities and viewpoints, leaving the audience suspended in their shifting sympathies and pondering other questions besides:

Are Anna’s drugs responsible for the dulling of her talent, or are they saving her life?

Was there ever anything substantially off-kilter in her mind in the first place?

Is Renee mothering or smothering?

Lee Lewis’ production is taut and stark, driven by Harding’s blazing performance as a young woman spinning off centre.

Her Anna is egocentric, intolerant of others and hard to like. Yet when Harding brings her to a manic climax in a gripping second half, you are not just transfixed by the sheer spectacle of it, but utterly feeling for her.

Harding’s febrile energy is balanced by Waterman’s delicate portrayal of the worn-down yet oppressively vigilant Renee, Cook’s inscrutable psychiatrist (whom you sometimes feel is observing Anna’s experiment with an eye to including it in her next book) and Shiv Palekar’s Oliver, Anna’s boyfriend, an apprentice locksmith working out how much he can take on aged 21.

Performed on a white cyclorama (a Dan Potra design), whose lack of familiar angles subtly contributes to the idea that all perspectives are moot, the production is spare and carefully considered. Lighting (Daniel Barber) and sound (Russell Goldsmith) are excellent and judiciously used, amplifying our understanding of Anna’s spiralling mania without drawing attention to themselves.

The Almighty Sometimes is a talky play – overwritten in parts, you could argue – but this fine Griffin production taps its underlying urgency and anger and seldom lets you off its hook.

Sydney Festival: A deep dive into the world of the Whiteleys has theatre maker Kim Carpenter revisiting conflicted feelings about his own direction in art.

A timely illustration of the ways in which Australia transforms those who come here and is itself transformed.

END_OF_DOCUMENT_TOKEN_TO_BE_REPLACED

Betty Grumble will radically reshape the way you think about femininity, pleasure and the body. 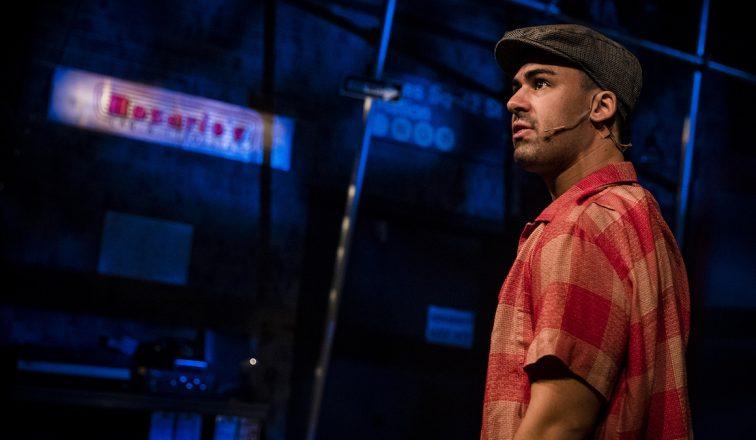 The Iliad – Out Loud

Sydney Festival: Homer’s account of the last weeks of the 10-year siege of Troy is the HBO series of its time.

Sydney Festival: A dark and comic collaboration devised and performed with ex-offenders explores the realities of our criminal justice system.