Audrey review: Candour and comedy combine in a piercing study of Millennial manhood.

Two guys, late twenties, on the eve of the wedding of a woman, Tamara, they have both dated.

Corgan (Isaacs) is straight and privileged. Mum bought him his inner city apartment and car. He doesn’t have to work.

Jimmy (Fowler) is gay, serves as a charity chugger for whatever cause the agency assigns him to. Like Corgan (who is struggling in the wake of his bust-up with Tamara), he’s nursing a broken heart after splitting with his boyfriend.

They hang out a fair bit at Corgan’s place, bonding over beers and serial attempts to get through the final level of Donkey Kong. It is a relationship of few words and unacknowledged depths. A bromance if you like, but one that only flowers when Corgan and Jimmy are alone. When Corgan’s straight mates are around, the dynamic changes markedly.

Though Corgan and Jimmy communicate with each other in monosyllables or drunken text messages sent at 3am from Perth’s nightclub strip, they speak openly to the audience in overlapping monologues offering pointedly differing perspectives on events leading up to Tamara’s big day and the bigger bugbears of loneliness, hook-up culture, homophobia, social anxiety and depression.

Isaacs and Fowler deliver all this in convincing, unsentimental, melancholic performances honed during FAG/STAG’s seasons in Perth and Melbourne (2015), Adelaide (2016) and Edinburgh last year. There’s nothing between actor and character and nothing much else in the production – save for Brett Smith’s sound design – to cushion us from the impact of the script’s candour.

The uplift in FAG/STAG’s final scene might seem calculated to send audiences out smiling. It certainly does (thanks to Bill Medley and Jennifer Warnes’ finest recorded moment) but you can just as easily take it as a moment of respite on a troubled journey toward self-acceptance.

Audiences are overwhelmed with choices at this time of year but if you can find a spare 80 minutes, you’ll be amply entertained and moved by FAG/STAG.

Acting and Anxiety: An Unlikely Friendship

James Millar, Australia's own Agatha Trunchbull, opens up about his life-long battles with anxiety and how acting helps keep it at bay. 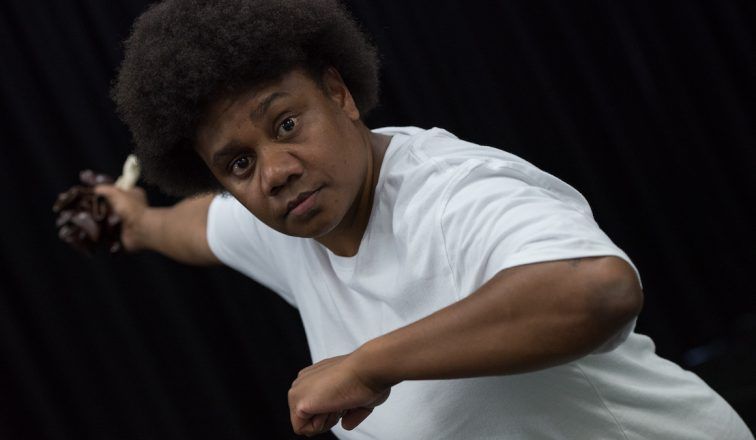 Dancer, comedian and air guitarist, Ghenoa Gela brings all her skill sets to a new show at Belvoir.

Benjamin Law and George Zhao talk turning points. One of them is Flubber.

END_OF_DOCUMENT_TOKEN_TO_BE_REPLACED

Justice vs mercy. Faith vs instinct. Love and the law. The conflicts in Shakespeare's ambiguous comedy endure.

Built inside a caravan, a film noir experience for one person at a time.

There Will Be a Climax

An elaborate company-devised clowning showcase sees its assorted characters in a spin.

An Act of God

Weary of the original Ten Commandments, God makes some adjustments to the moral code.